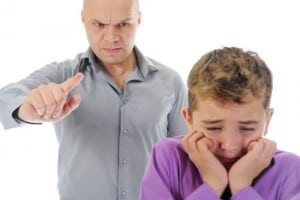 Ever heard that little ditty? I grew up with it. In fact, it was handy to yank out of the closet to diffuse matters whenever my own rather vocal toddlers began a slinging match with one another. Then my six-year-old wisely pointed out to me one day that, in fact, words can harm you. On the inside. We agreed that a little teasing in itself is harmless, but the ditty was dutifully dumped-I’m still trying to find a replacement!

What is Self-Esteem?
Basically, it’s how we feel about ourselves. As my son pointed out however, feelings are something “on the inside.” It’s your child’s behavior that will generally reflect these feelings. According to clinical psychologist Christine M. Rankin, “Identity as an individual refers to what a child knows and accepts about him/herself apart from any other person or activity in which the child is involved. Children ‘carry’ this part of self-esteem with them, like a backpack, wherever they go. These traits and qualities make the child feel unique and special.” Importantly, it is parents (and other prominent adults in your child’s life) who identify and reinforce these qualities until they are eventually internalized by your child.
Nurturing
How can we ensure that the environment we create for children is one which will nurture a positive sense of self within them? It’s often a lot easier said than done.
Child development specialist Sharron Werlin Krull says that, “Children with high self-esteem generally have parents that have set high standards and expectations that are clear, reasonable, and consistent for them and that give them encouragement and support.”
Some of her suggestions to promote positive self-esteem in children are:
The Child Development Institute (CDI) advises that parents teach children to change their demands to preferences. It’s often a surprising reality for children to discover that there is simply no reason they must get everything they want. Helping them to accept this will help them learn not to become angry when they’re disappointed. Try to set a good example yourself and praise them for displaying appropriate irritation (we’re human after all) rather than anger in pertinent situations.
Another valuable piece of advice from the institute is to help your children think in terms of alternative options and possibilities rather than depending upon one option for satisfaction. For example, a child who has only one friend and loses that friend is friendless, but a child who has many friends and loses one, still has many. This same principle holds true in many different areas. Helping your children to realize that there are often several options in various situation will increase their potential for satisfaction.
Click here to read the rest of the article.